The Rapid Rise of Diabetes Technology

Health and smart technology have been integrating with enormous success over the past two years. The market for fitness trackers has seen explosive growth, with 13.4 million units sold in 2015 – an increase of around 7.2 million from the previous year.

Health and smart technology have been integrating with enormous success over the past two years. The market for fitness trackers has seen explosive growth, with 13.4 million units sold in 2015 – an increase of around 7.2 million from the previous year. This success has led companies across healthcare to look for ways to integrate smart technology into their products too. Diabetes prevention and management is one such area, as the market for blood-sugar tracking is predicted to be worth over $12 billion by 2017 due to Type 2 Diabetes growth rates.

They say there’s an app for everything, and diabetes management is no different. A cursory browse of the App Store brings up dozens of apps designed to help people living with diabetes track and log their vital information. Right now there are apps which help to monitor activity levels, food intake and medication schedules, but most of them rely on the individual to input timely and accurate information.

Future developments will see diabetes management become more seamless as companies combine non-invasive glucose monitoring, smart devices and health apps. One example of this is a recent patent of a smart device by Google, which uses pressurized gas to make tiny openings in the skin – reducing the pain and inconvenience of traditional lancets. Other examples include a smart contact lens, which was originally conceived by Google to light up when blood glucose levels are above or below the desired threshold. This has now been further developed by Samsung to link up directly with smart devices – meaning a notable reading could result in something as simple as a buzz on the wrist. 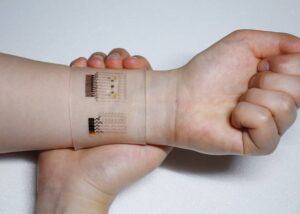 Developments in the field even extend to microwave-based glucose tracking via monitors which discreetly stick to the skin, and graphene-based patches. This not only monitors blood-glucose levels through sweat, but can also administer management drugs such as Metformin through temperature-responsive micro-needles.

The NHS is also adopting smart technology into its care regime with the introduction of Diabetes Digital Coaches. The scheme will provide wearable sensors – and potentially a bespoke app – to people with Type-1 and Type-2 diabetes. This will not only help individuals to monitor their health, but will also allow the NHS to upload information directly to their health records so the professional carers can be aware of their medical history too. This could be crucial for the care of those living with diabetes, a fifth of whom have been estimated to suffer a “largely avoidable” hypoglycaemic episode whilst in hospital.

The future looks positive with individuals and healthcare organisations already benefiting from the increased affordability of smart technology and a fresh emphasis on app-driven automation.

The willingness to embrace technology in diabetes care also extends to the NHS’s ‘Virtual Clinics’ initiative. These are remote appointments that are attended by the patient using downloaded software such as Carelink or Diasend. They are designed to give Type-1 patients more time with a diabetes professional versus a normal appointment, and again make use of a live, up-to-date diabetes record.

As the number of people diagnosed with diabetes in the UK exceeds 4 million for the first time, the need for smarter, seamless management of the condition becomes more and more important. But the future does looks positive – with individuals and healthcare organisations already benefiting from the increased affordability of smart technology and a fresh emphasis on app-driven automation.